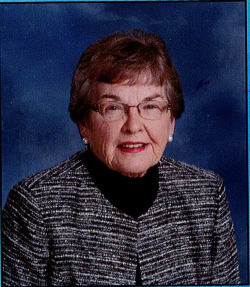 She was born on April 8, 1935, in Cortland, the daughter of William Riley and Teresa Comerford Riley. Her early childhood was spent in Truxton where she experienced family farm life. She attended Truxton Central School graduating in 1953. She continued her education at Nazareth College in Rochester, majoring in Social Work. In the summer of 1956, she sailed to Europe with her classmates. She graduated Nazareth College in 1957.

Her first employment was for the City of Cortland Youth Bureau. On May 31, 1958, she married Andrew (Tony) Beerman. They made East Homer their home for 55 years. While there, she was a member of St. Patrick’s Church.

Following the birth of two of her children, she returned to work for the Cortland School District. In 1973, she was hired by Homer Central Schools. Her final position was the Cortland County Department of Social Services. In 2007, she retired with 30 years of services.

She was an active member of St. Margaret’s Church in Homer. She served on the Parish Council, Human Development Committee, and Funeral Committee. She also served as a Eucharistic Minister for many years. Following retirement, she volunteered at the Brewster House and Cortland Repertory Theatre. Prior to Tony’s death, they enjoyed many activities together including skiing at Labrador Mountain and camping. She played bridge on a weekly basis with her friends and that brought her great pleasure.

Sharon’s passion in life was to teach her children to be happy and successful; to treat their friends with kindness and to love and serve their God.

Funeral services will be at 10:00 a.m. on Friday, May 20, 2022 at St. Margaret’s Catholic Church, where a Mass of Christian Burial will be celebrated by the Rev. Joseph Zareski. Interment will follow in St. Mary’s Cemetery, Cortland.

In remembrance of Sharon’s, any charitable donations be made to St. Margaret’s Church or Cortland YWCA.

x101_wxhc
•
Follow
We’re enjoying the AgeLess Band this evening on the Homer Village Green. What a gorgeous night for some jazz! #Jazz #HomerNY #MyCortland
View on Instagram |
1/20

x101_wxhc
•
Follow
Oh gosh, remember printing these things out!! The young people would never be able to get somewhere with this paper. #LongAgo #NoGPS #AlwaysClassic
View on Instagram |
2/20

x101_wxhc
•
Follow
We’re so glad the rain held off tonight for the first concert in the Village of Homer Concert Series with The Old Timers Band! #SummerMusic #VillageGreen
View on Instagram |
3/20

x101_wxhc
•
Follow
We've been looking forward to this event all week! Saturday it’s the 25th annual clearance sale. We’re gonna be on-location from 10 am to Noon right outside the store on Luker road in Cortland. Get what you need for those summer projects. Save up to 80% off on Windows, Doors, Lumber, Plywood, shingles, cabinets and more. We'll have plenty of free giveaways as well. #OnLocation #MyCortland #AlwaysClassic
View on Instagram |
13/20

x101_wxhc
•
Follow
Ray Liotta, the actor whose career breakout came in the 1990 Martin Scorsese crime classic Goodfellas after co-starring in Field of Dreams, has died. He was 67. RIP. Gone to soon
View on Instagram |
14/20

x101_wxhc
•
Follow
In a press conference this morning at Guthrie Cortland Medical Center’s Main Entrance on Alvena Ave. hospital president Jennifer Yartym, MSPT, MBA was joined by Mayor Scott Steve and caregivers from many hospital departments. “We made a proclamation of May 10th as Guthrie Medical Care Center day in honor of caregivers that had given up these last couple of years during this very difficult time of COVID” said Scott Steve. “Everyday should be nurses day or healthcare week because truly the last two and a half years with those individuals on the front lines we wouldn’t have been able to keep afloat without them.” said Hospital president Jennifer Yartym. #Guthrie #NursesWeek 📷 courtesy of Guthrie
View on Instagram |
18/20