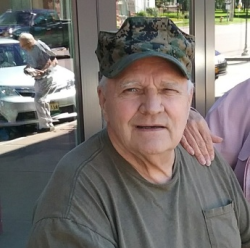 Ronald Lee Heilgeist, 76, of North Main Street, Homer, passed away following an extended illness on July 10, 2022 while under the care of Hospice and his loving family.

He was born March 28, 1946 in Dixon, Illinois, the only child of Paul and Mildred Frase Heilgeist. Ron entered the United States Marine Corps in February 1966 and was honorably discharged in February of 1968.

For several years he was employed as a police officer primarily in Colorado, before becoming a freelance photographer.

He relocated to Homer in 2010 where he was a member if the Cortland County Marine Corps League and the Romeo Club.

Services will be private and at the convenience of the family.

Memorial contributions in Mr. Heilgeist’s name may be directed to Hospice of Cortland, the American Cancer Society, or the Cortland County Marine Corp League.

x101_wxhc
•
Follow
A look over yesterdays 22nd annual Brockway Truck Show from the top of our studios in Downtown Homer. #Brockway #HomerNY
View on Instagram |
1/20

x101_wxhc
•
Follow
We’ll be on location at the Arts Off Main Festival from 11 am to 1 pm this Saturday, August 6th. This is a reimagining of the twelve-year-old Arts & Wine Festival, taking place in the parking lot behind the McNeil building, nestled between Main, Central and Church Streets. These areas will be transformed into a family-friendly celebration of Cortland’s art and creativity, and downtown. #ArtsOffMain #MyCortland
View on Instagram |
3/20

x101_wxhc
•
Follow
History has been found at the old Gillette Skirt Factory off of Homer Ave. in the City of Cortland. Yesterday, Troy Beckwith Sr. unveiled the location of a time capsule that was discovered inside the first concrete block laid in the construction of the building back in 1904. #History #TimeCapsule See our photo gallery at wxhc.com, link in the bio
View on Instagram |
9/20

x101_wxhc
•
Follow
Rival coaches, but a team on the mound when both head coaches of SUNY Cortland and Ithaca College football teams throw the ceremonial opening pitch for an MLB Yankees Game on Thursday, July 28. 📷 Courtesy of @sunycortland #CortacaJug #Yankees
View on Instagram |
12/20

x101_wxhc
•
Follow
A reminder to make sure your pets are ok with all the fireworks happening! #TakeCareOfTheAnimals
View on Instagram |
14/20

x101_wxhc
•
Follow
We’re enjoying the AgeLess Band this evening on the Homer Village Green. What a gorgeous night for some jazz! #Jazz #HomerNY #MyCortland
View on Instagram |
15/20

x101_wxhc
•
Follow
Oh gosh, remember printing these things out!! The young people would never be able to get somewhere with this paper. #LongAgo #NoGPS #AlwaysClassic
View on Instagram |
16/20

x101_wxhc
•
Follow
We’re so glad the rain held off tonight for the first concert in the Village of Homer Concert Series with The Old Timers Band! #SummerMusic #VillageGreen
View on Instagram |
17/20