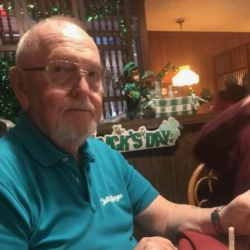 Mr. Roger H. Glazier, 79, of Cortland, passed away on October 26, 2021 at Cayuga Medical Center, Ithaca, N.Y. Born March 17, 1942 in Cortland, Roger was the son of Ivan and May Purvis Glazier and was a lifelong resident of the area. He had faithfully served his country in the U.S. Army and later in the National Guard.

Roger had retired from S.U.N.Y. Cortland in 1996 where he was employed for over 30 years as a maintenance supervisor. Prior to his employment at the college, Roger worked various jobs in the area. He was employed by Durkee’s Bakery, custodian with the Methodist Church and also employed by the Cortland Standard. After his retirement from the college he also worked part time for Ames Department Store, Tops and Valu Home Center. Roger was also a faithful member of the Masons for over 40 years.

Roger is survived by his wife of 57 years; Bonnie Samson Glazier, his twin daughters; Dedra (Steven) Ingraham of Greene and Debra (John) Leone of Etna, a sister; Viola (Don) Shutts of Lake Como and 3 grandchildren; Brandon Prosser and Wyatt and Mackenzie Ingraham and many nieces and nephews. In addition to his parents, Roger was preceded in death by his siblings; Euberta Glazier, Leola Grant, Isabelle Woodward, Winifred Glazier, Lucy Sexton, Jane Glazier and Norman Glazier.

Services will be held on Saturday at 12 noon in the Chapel of Riccardi Funeral Home 69 N. Main St, Cortland, N.Y. Prayers of committal will follow in Cortland Rural Cemetery. The family will receive friends on Saturday from 10 a.m-12 p.m. in the funeral home chapel prior to services. Contributions in lieu of flowers may be made to Masonic Lodge in Cortlandville as well as the Cortlandville Eastern Star or by making a blood donation to the America Red Cross or to a favorite charity. Condolences may also be sent by visiting www.riccardifuneralhome.com

Please note, Masks will be required for the visitation and funeral service.