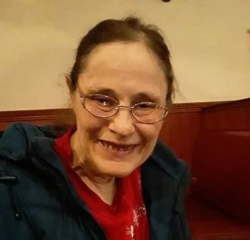 Robin was born in Cortland, a daughter of the late Lawrence and Dorothy Proffitt Grummons.

She had worked at NCC Industries and McDonalds before becoming a stay home mother, dedicating her life to raising her children.

Robin was a devout Christian. She attended Calvary Baptist Church in Preble for many years. She was also active at the Cortland Pregnancy Center.

Surviving is loving husband of 32 years, Richard L. Olmstead; her children, Lori Proffitt of Conway, SC; Robert Marks of Homer; Lawrence (Crystal) Sinn of Groton; Ricky (Heather) Olmstead of Summerville, SC; and Stephen and Melissa Olmstead, both of Homer; a sister, Linda Garv of Moravia and her grandchildren, Kara, Kyle, Evan and Eli Sinn; Emily and Andrew Marks and Kenslie Olmstead and several nieces and nephews.

In addition to her parents, she was predeceased by a brother, Donald Grummons.

Funeral services will be held at 11:00 a.m. on Friday at Calvary Baptist Church, 6753 Route 281, Preble, with Pastor Tim Mowers officiating.