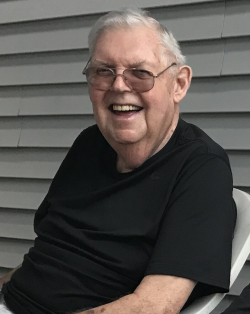 On December 12, 2021, Robert Dewitt Tytler Jr. of Cortland, NY left us to have a meal with his maker. We don’t know if it was breakfast, lunch, or dinner but there is a good chance that if breakfast was available that’s what Bob would have chosen (but only if he could have the home fries nice and crispy). If dinner was served and a good Manhattan was offered, we are certain it would not have been refused.

Bob was born on March 13, 1932. He was a devoted and loving husband, father, and grandfather. He is survived by his wife of 67 years, Joyce, his daughter Becky (Rich) Barrows, his sons Bruce (Carol) Tytler and Paul (Barbara) Tytler, two granddaughters Rachael (Ryan) Murray and Sarah Tytler, two great grandsons Joe and Ben Murray, his brother Laverne “Whiz” (Jane) Tytler as well as many nieces and nephews. Bob was a member of the American Legion Post 376 and a dedicated charter member of the Oxford Lions Club.

Bob’s professional life included two years in the Air Force where he spent one year in Korea during that conflict, working on a farm while driving a truck delivering propane, and managing a feed store. Most notably, Bob was a salesman with The Page Seed Company for many years until his retirement in 1998. Bob was regularly the top salesman for Page Seed and truly respected by his co-workers. His sales territory covered much of Central New York and some of the North Country. He was famous for knowing the best place to get breakfast or lunch at a reasonable price throughout his sales region. If you were driving someplace and needed directions, Bob could tell you three different ways to get there. And one of those ways would often include explaining that you had to “go around the curve just past the hill and turn right.” And yes, hand movement was usually included during the telling of how to get to where you wanted to go.

The old cliché about strangers being “just friends that you have not yet met” certainly applied to Bob. Inevitably the person he was just meeting would know someone Bob knew; it was uncanny how often that happened. Bob’s smile and generous nature will be remembered by all who knew him. He would give someone the shirt off his back and no one who sat down at his dinner table ever left hungry.

Bob loved all things connected to camping and agriculture. As he aged out of being able to camp, Bob enjoyed simply sitting outside, drinking a cold beverage, and visiting with family and friends. He enjoyed watching Hallmark movies, the RFD channel, the Yankees, and listening to old-school country and western music.

Bob was predeceased by his parents, Robert Sr., his mother Loretta Branigan, his sister Donna Simpson and his brother-in-law Aubrey Simpson, and his beloved dog Toby.

Calling hours will be held on Monday December 20, 2021, from 11am-1pm at the Wright Beard Funeral Home, 9 Lincoln Avenue in Cortland, NY with services immediately afterward. The family requests anyone wishing to pay their respects to please wear a mask as young unvaccinated children will be present. The family asks that in lieu of flowers, donations be made to the American Legion Fort Hill Post 376, 17 S. Washington Avenue, Oxford, NY, 13830 or the Oxford Fire Department, 20 Main Street, Oxford, NY, 13830.