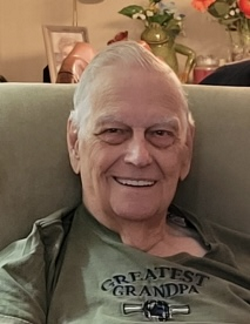 Born May 18, 1939 in Elmira, NY he was the son of the late James Harper Ayer and Bernice Ham Ayer. On December 8, 1962 he married the former Carol Ingraham. Bob worked for 32 years with USDA-ASCS Farm Service Agency out of Syracuse, NY, retiring as District Director. Bob was a 32nd Degree Mason and a member of Tritown Lodge #472 F.&A.M. He was also a member of the Scottish Rite and Hudson Fulton Dryden Chapter 250 O.E.S., Dryden Kiwanis, member and former President of Dryden Senior Citizens and the Dryden Q tips coffee club. He was also a former member of the Lions Club in Fulton, NY.

Friends are invited to call from 10 am until 12 pm at Perkins Funeral Home, 55 W. Main St., Dryden, NY on Saturday, January 21, 2023. Masonic and Eastern Star Services will begin at 12 pm followed by a Memorial Service with Pastor Penny Sutterby officiating. Burial in Green Hills Cemetery will be at the convenience of the family. In lieu of flowers, memorial contributions in Bob’s memory may be made to National Kidney Foundation or American Heart Assoc.