10 hours ago
Public Opinion on Proposed Redistricting; Against
11 hours ago
Seeds of Hope Concert Tomorrow at Rose Hall; May Is Mental Health Awareness Month (Audio)
13 hours ago
Calls for Hochul and Legislative Leaders to Pass Student Loan Forgiveness Bill
13 hours ago
Click It or Ticket Campaign to Begin on Monday 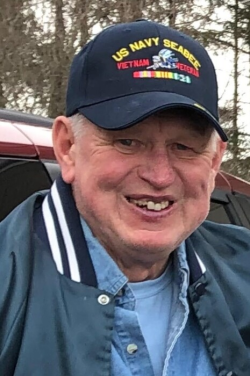 Richard was born on February 5, 1946, in Cortland NY. He was the son of the late Ruth (Neff) Weibly and Donald Sr. Neff (Pete) both of Cortland, NY.

A native of Cortland, Homer, and McGraw. He graduated from Cortland Senior High School, class of 1966. After graduation he proudly served with the United States Navy in the Vietnam war as a M-C Battalion Seabee 40. After his honorable discharge, Richard used his training to start his own business as a contractor for Neff’s Refrigeration.

He married the love of his life, Mary Jane (Snyder) Neff on September 6, 1968. They were happily married for 53 years. Richard was predeceased by his wife Mary Jane, a brother Donald Jr. Neff (Butch), and a loving second family Roy and Mary Crandall.

Richard was a member of the Dryden VFW, Cortland American Legion, Cortland DAV and the Cortland Eagles Club. He was an avid race car enthusiast. He raced microds, stock cars and snowmobiles at many local tracks. One of his most memorable moments was when he became the 1962 MR2 National Microd Champion.

Richard was a very kind and giving man, who had a wealth of knowledge and advice that he would share. He was quick with a joke and long with a story to anyone that would listen.

He will be missed by his family and friends.

Services will be held at Perkins Funeral Home in Dryden NY, Saturday May 7. Calling hours will be starting at 10:00 am with the funeral to follow at 11:00 am.

In lieu of flowers, contributions may be made to the Tompkins County SPCA.