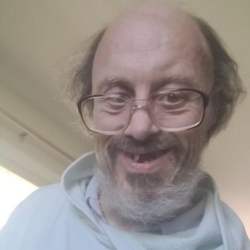 Richard James Smith 63 of Cortland passed away on January 1, 2023 at Cayuga Medical Center after a brief illness. Richard lived with his family until February of 2021. In March of 2021 he moved into the Burch IRA with the Madison-Cortland ARC. Richard started his time with the ARC showing love, sharing smiles and enjoying “family time”. Richard then Moved the Bellevue IRA in the spring of 2022. Where he continued making others smile and laugh. Richard had a love of pens, Cooking Shows, magazines but his most favorite hobby was looking at and collecting cook books. Richard loved to talk about all sort of foods that he wanted to learn how to cook and bake, when he helped staff cook, he would smile from ear to ear telling the staff what was needed for the dish in his Italian voice while using his hands like Italians do with a Giant smile, Richard couldn’t wait to try his creations. When Richard moved to the Madison-Cortland ARC he showed his true passion of spreading love, laughter and smiles for days all while sharing his stories of his life experiences. He became very close to his housemates and created a strong friendship’s that lasted until the very end.

Richard made a lasting impression on all he met making sure they all knew just how important each and every one of them were to him. Richard enjoyed spending his days with his friends and staff at the JM Murray Center in Cortland where he enjoyed going out with his friends and giving back to the community. Richard introduced the staff to his favorite cooking shows where he would talk for hours about things he learned while watching his Idol Julia Child’s. Richard showed others that no matter what life throws at you all you need is a little love, big smiles and dance parties. Richard’s favorite dance of all time was the Chicken Dance. His most favorite song of all time was Girls just wanna have fun by Cyndi Lauper
Richard will be remembered as the gentle, quiet soul that could light up the room with his laugh, smile and dance moves along with his spunky side that no matter made others smile.

Richard is pre-deceased by his Parents Paul and Velia Smith along with his sister Paula who passed in February of 2021.Richard is survived by his many friends and staff at the JM Murray Center, along with his many Staff, Friends (family) at the Madison- Cortland ARC.

Funeral services will be conducted on Monday at 12 noon from the Chapel of Riccardi Funeral Home 69 N. Main St., Cortland, N.Y. with Rev. Dennis Walker officiating. The prayers of committal and burial will follow in St. Mary’s Catholic Cemetery. Friends may call on Monday from 11 am-12 noon prior to the start of services. www.riccardifuneralhome.com