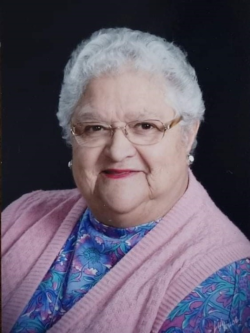 Patricia J. Griswold, 84, of Preble, passed away on April 18, 2022 in the Guthrie Cortland Nursing Center.

A lifelong area resident, Pat was born August 22, 1937, a daughter of the late Robert and Leona Reynolds Stone.

Pat was an active and faithful member of St. Margaret’s Church, Homer.

She was employed for several years at Little York Plantation and had been a substitute secretary for the Homer Central Schools.

She was predeceased by her husband, Calvin ‘Jim’ Griswold in 2018, a daughter, Renee C. Griswold in 2005; sister and brother-in-law, Sandra and Raymond Liddington and her sister, Nancy Stone.

Funeral services will be at 10:00 a.m. on Saturday, April 23, 2022 at St. Margaret’s Catholic Church, where a Mass of Christian Burial will be celebrated. Interment will follow in Elmwood Cemetery, Preble.