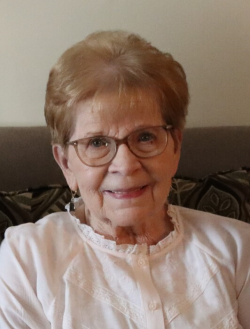 Mary B. Bachner (née Balfour) passed away peacefully on June 20, 2022 at the Guthrie Cortland Medical Center with her loving and devoted husband at her side.

Mary was born on April 3, 1937 to George H. and Josephine Y. Balfour in Watertown, New York. Mary was raised in Watertown and graduated from Watertown High School in 1955. After graduating high-school Mary attended Bucknell University and was a member of the class of 1959.

Throughout her working years Mary held a number of municipal jobs including the Town of Dryden Court Clerk, a case worker for Jefferson County, and later as a valued member of the staff at the Tompkins County Board of Elections. The majority of Mary’s work life was with First Federal Savings and Loan where she held a variety of positions.

The greatest joy in Mary’s life was her family. She leaves behind her loving and devoted husband of fifty-three years, Fred Bachner. In addition to her husband, Mary is survived by her children; Sharon Bachner of Groton, Fred, Jr. (Tracey) of Dryden, and Gretchen Bachner of Dryden. Mary is also survived by her five grandchildren which she adored; Lillian, Claudia, Frederick III (Ricky), Joseph, and Charlotte, all of Dryden. Mary is also survived by her sister-in-law Joanne Balfour of Fayetteville, NY, as well as numerous nieces and nephews.

Mary was predeceased by her parents George and Josephine Balfour and her brother George H. Balfour, Jr.

Calling hours will be held on Monday June 27th, from 4:00 pm to 6:00 pm at Perkins’s Funeral Home in Dryden. A funeral celebration will be held on Tuesday, June 28th at 11:00 AM at the funeral home with Rev. Peter Williams officiating with burial to follow at the Willow Glen Cemetery.

Those wishing to make donations in Mary’s memory are graciously requested to consider Shriner’s Hospitals.