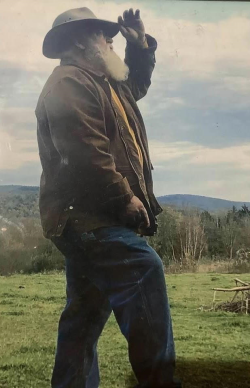 Marlin was a strong Christian who believed in his higher power. Marlin was a proud farmer and loved his animals. He raised horses, chickens, pigs, and oxen. He even trained his oxen for parades. He enjoyed his yearly trip to Maine where he would buy new oxen from the state fair. He enjoyed gardening and spending time with his family, especially his grandchildren. He taught them horseback riding, barrel racing, and they attended rodeos together. Every year Marlin was Santa at the Water Works in Cortland as well as surrounding areas. He loved teaching children and making them happy. Marlin was proud of his sobriety for 33 years and attended AA. He was a true father figure to everyone and provided guidance for anyone in need.

He is predeceased by his parents Gerald and Amie Willis, and his sisters Diana Willis and Joan Willis Elander.

Calling hours will be held on Saturday November 13, 2021 from 10-1 at the Wright-Beard Funeral Home, 9 Lincoln Ave., Cortland, NY. A funeral service will follow. Burial will take place at the Virgil Cemetery immediately following the service.