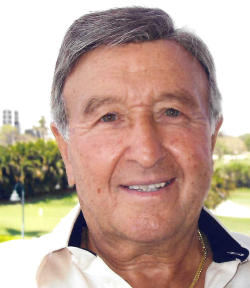 He was predeceased by his loving wife Lilian “Lil” (Corona) Fiorentini of 71 years, his parents Italo and Vincenza (Spaziani) Fiorentini, sister and brother-in-law Melana (Fiorentini) and Tony Manderano.

A United States Army veteran, Louis was a recipient of the Purple Heart, World War II Victory Ribbon, and many other awards for valor. He attended Morrisville College where he initially studied Automotive Technology. After being wounded at the Battle of the Bulge, he returned to Morrisville to earn a degree in Gemology and Horology. He and his wife Lil were proprietors of Fiorentini Jewelers in Cortland for 41 years where he worked as a jeweler and watchmaker. The two enjoyed traveling the world together. Lou was a member of the International Jewelers Association, and the Cortland Country Club where he enjoyed golfing. He had many well known friends and acquaintances like Boxer Carmen Basilio, baseball player Joe DiMaggio, football player and golfer Dan Marino, and owner of Northwester Golf Co Nat Rosasco, just to name a few. Being investigative and adventurous, he pursued many activities. Among these were boxing, skiing, tennis, hunting, fishing, playing the keyboard and the violin. Into his 90’s, he was still interested in, and very savvy with computers.

Lou was a fantastic son. His parents spoke limited English, so he coached them in American customs. He was a loyal brother who acted as a surrogate American father. He was a devoted husband until the very last day. While she was a resident in the Whispering Pines unit at Cortland Park, he visited his beautiful bride every day without fail. Lou was a loving father and grandfather, a wonderful uncle, cousin, and friend. He will be sorely missed by all who knew him.

The family is especially grateful to Laina Valent, Stephanie Potts, Kaaren Pierce, Mike Williams and his in-home caregivers (Betty, Lynn, Chantel, Sheri, Becky, Ebony, and Jamie) who made it possible for Lou to live out his final days at home as he wished.