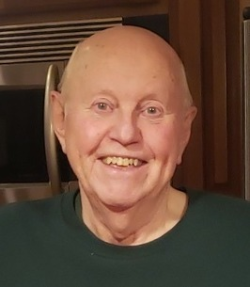 He grew up in Homer, NY, graduated from Homer High School, Class of 1960 and received a Bachelor of Science degree from Cornell University.

Larry went into business for himself at an early age by growing vegetables on the family farm and selling them at a local stand. When prompted, he loved retelling stories of his early entrepreneurship with ‘peas’ and ‘cabbage’. After college graduation, Larry worked as an appraiser, eventually forming Fitts Appraisal, as a private company. Most of his life Larry was known as a prolific Town Assessor, appointed by up to 13 towns at once, from the greater Central New York area. He loved the challenge of his positions, working with the community members on a daily basis and was respected by everyone with whom he interacted.

Larry was active in sports throughout his life. He competed in track in high school, pick-up basketball games in college, and throughout most of his adult life was an avid golfer and bowler. He cherished being involved with his sons’ teams in hockey, basketball, and golf. He contributed much of his time to after school sports activities and teams in the Homer and Dryden school districts. His sons remember that Larry never missed a game or match throughout their entire high school years. He remained an active sports fan throughout his life and was a season ticket holder for pretty much any sport in the Syracuse area that involved a ball or a puck.

Larry was a master story-teller and his sons often encouraged him to put the tales of his colorful life down on paper. Sadly, he simply ran out of time. Larry touched the lives of many people in his life and the world won’t be as bright with him gone.

In lieu of flowers, please make a donation in Larry’s name to the Humane Society.