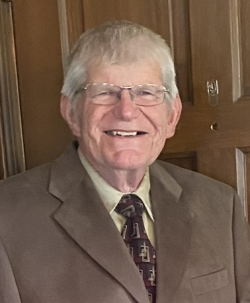 Kenneth F. Woodman, 80, a resident of Cortland for 51 years, passed away on December 6, 2021 at the Guthrie Cortland Medical Center after a short battle with cancer.

Calling hours will be held at the Homer Elks Lodge, 82 Cortland St, Homer on Sunday, December 12, 2021 from 1pm-3pm. Immediately following the calling hours, a Celebration of Life ceremony with full military honors will be held at the same location starting at 3pm. Interment will take place at St. Mary’s Cemetery later in the spring of 2022. Wright-Beard Funeral Home in Cortland will be handling funeral arrangements. The family encourages anyone that would like to, bring photos to show and stories to share for the calling hours.

Ken was born in Syracuse, NY to the late Albert and Stella (Steckiewicz) Woodman on April 19, 1941. He graduated high school from the Sacred Heart Academy in Syracuse in 1959. Soon after graduation, he enlisted in the US Air Force and proudly served his country from 1959 to 1964 at various locations throughout Europe. Following his honorable discharge in 1964, Ken went on to work for Honeywell for over 27 years at locations in CNY before his retirement. Ken began a second career with Air Temp Heating and AC and continued to work until his retirement in 2007.

Ken was a true patriot and volunteered endless hours of his time for many different organizations in CNY. Nothing gave him more pleasure while volunteering then driving thousands of miles transporting our disabled American veteran heroes to and from their critical medical appointments at VA hospitals. Ken was also active with the Madison Cortland ARC Guardianship Committee, Cortland County Developmental Disabilities Subcommittee, Seven Valley Snow Goers and Groton Ridge Runners snowmobile clubs and most recently with the Homer Elks Lodge #2506. Ken’s love for motorsports was enjoyed throughout the 1970’s when he regularly competed in the region racing with the Virgil Mountain Enduro Riders. Motorcycle racing was replaced by snowmobiling in the early 1980’s which continued until his passing.