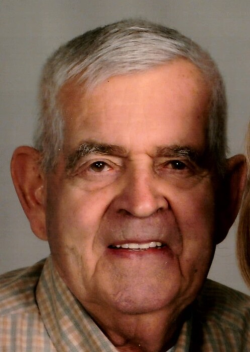 It is with profound sadness that we report the death of John VanDeWeert—husband, father, grandfather, brother, uncle, and friend—on November 16. John’s physical heart failed him, but his big heart and big spirit live on with those who knew him.

John was born on July 30, 1940 in Midland Park, New Jersey to Garrett and Ella VanDeWeert. At age 8, John’s family moved to Michigan Hill, Richford, New York. He married Henrietta (Hummy) Hornstra on November 20, 1971. Together they raised four sons. He graduated from Newark Valley High School in 1958, studied dairy science at Cornell and Alfred State, and eventually earned his Associates’ Degree in Accounting from TC3 in 1990.

John devoted the first half of his life to dairy farming—in Richford and Etna, New York; in King George, Virginia; and then in Dryden, New York. He left farming as his long-term kidney disease became worse and required dialysis, though his devotion to John Deere tractors never waivered.

In 1990, John’s life was renewed by a kidney transplant. His new kidney was still going strong after 31 years, which may not have set a record but certainly exceeded expectations. John enthusiastically took up bus driving, driving for Dryden Schools and for Swarthout Coaches. He also drove trucks and helped out farmers. John was happiest when he was busy working—he believed in working hard. In retirement he was constantly traveling, visiting numerous National Parks throughout the country and making trips to visit family.

John was a devoted member of the Dryden United Methodist Church. He served multiple terms as Trustee, and could be counted on every Sunday as well as at work events.

John was also a people person. He thrived on seeing his family members, including in recent years for weekly chili dogs and dominos with his siblings. Known as “chief” to many of his nieces and nephews from his days working on the farm, he was also recognized by many in Dryden from his years driving the school bus. He was known for losing at pinochle, flying an airplane, fishing, recognizing classic cars by year and make, taking notes obsessively, and taking every opportunity to fix an appliance himself (or break it more).

John is survived by his wife Hummy of 49 years and 360 days; his children John Jr., Steve, Joe (and Lisa), and Mark; grandchildren Lily and PJ; siblings Gare (and Joyce), Ron, and Elaine; brother-in law Gord; and numerous nieces, nephews, and cousins. He was predeceased by his parents; siblings Bern (and Patricia), Henry (and Helen), and Carol Ann; and brothers-in-law Dick and Jim.

The family will receive friends at Perkins Funeral Home in Dryden from 4-6 pm on Friday, November 26. John’s life will be celebrated at a service at Dryden United Methodist Church at 10 am on Saturday, November 27. The family requests that guests wear face coverings and observe other Covid protocols. Due to Covid, a reception and opportunity for family and friends to remember John will be scheduled in the future.

In lieu of flowers, memorial donations can be made to the Dryden United Methodist Church or the HANDS Fund c/o Dryden Central Schools. Online condolences at www.perkinsfh.com