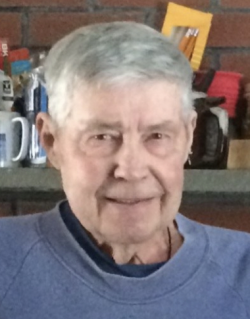 James (Jim) D. Webster of Dryden died June 14, 2022. He was born November 3, 1933, in Syracuse, NY, and was a 1950 graduate of Syracuse Central High School. Jim retired from New York Telephone Company with 43 years of service. He also served 2 years in the Army as an MP. Jim was proud of his Native American heritage. He was an ardent supporter of environmental, animal and women’s causes. He enjoyed playing basketball in his younger years and was an avid fan of Syracuse University basketball – except for their fondness for 2-3 zone. He firmly believed in eating to live and not living to eat.

James was predeceased by his parents, Harold and Edith (Gwilt) Webster and his twin sister, Joan (Lou) Fischer. He is survived by his children, Janet (Jim) Jackowski of Cumberland, MD; Linda Webster of Framingham, MA; Nancy (Rob) Taylor of Hopewell Junction, NY; Andrew (Karen) Webster of Tolland, CT; and Joanne (Dave) Norford of Charlottesville, VA; and grandchildren Madeline, Eric, Pete, Tyler, Eliza, Shane, Brice, Jackie, and Case. Memorial contributions may be made in Jim’s name to Arbor Day Foundation, Tompkins County SPCA or you favorite charity. A private burial will be held at South Onondaga Cemetery at the convenience of his family. Arrangements have been entrusted to Perkins Funeral Home. Online condolences at www.perkinsfh.com