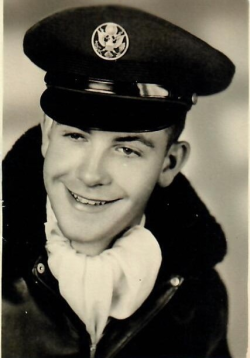 James Andrew Gray of Homer, NY passed away peacefully on May 4th, 2022.

Jim’s love of nature and animals began when he was a young boy where he lived on Cold Brook Road outside of the village of Homer. He would tell stories of exploring the countryside with friends and even sledding to the one room schoolhouse that he attended to the end of third grade. After his family moved into the village of Homer, some of his fondest memories as a teenager were fishing, hunting, cross-country skiing, and working on the Creal family farm.

Jim joined the U.S. Air Force in 1953 where he was a technician on aircraft gunnery systems while stationed in Colorado, Florida, and Morocco. From his service came his admiration of the American flag and Veterans Day. He enjoyed engaging in conversation with other veterans.

Jim worked as a Glazier installing windows in schools all over NYS. He was also a volunteer for the Homer Fire Department. Summers were spent having fun with his family on Skaneateles Lake sailing, fishing, long distance under water swimming, swinging on the famous rope swing, and knee-boarding on an old wooden door.

In retirement, Jim enjoyed woodworking projects and camping in the Blue Ridge Mountains. His barn became the central hub for bike repair, sales, and conversation. One of Jim’s favorite bike routes was his nine-mile round trip from Homer to Little York which he rode well into his eighties. He inspired people of all ages to cycle and enjoy their ride!

Jim had a subtle sense of humor that would often send his family as well as new acquaintances into a roaring laughter. His gentle spirited nature will always echo in the hearts of everyone who knew him. He modeled remarkable resilience while dealing with multiple health issues over the last couple of years.

The family wishes to thank everyone for their prayers. A private family service will be held for Jim at a future date. In honor of Jim’s life, contributions can be made to the Homer Fire Department or the Cortland SPCA.