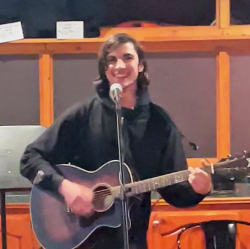 Jake graduated from Naperville North High School in 2021. While there he was co-captain of the wrestling team, a state qualifier in 2019, IWCOA freshman/sophomore state series IWCOA section qualifier and state alternate during the 2021 season. In addition, he took part in the state duals that year and his win in his final match secured the victory for his team. Jake had found a new passion playing guitar and bass and was hoping to fulfill his dream of becoming a musician.

Family and friends are invited to call from 5-7 pm on Tuesday, October 4, 2022 at Perkins Funeral Home, 55 W. Main St., Dryden, NY. Private graveside services will be held on Wednesday in East Lawn Cemetery, Ithaca with Pastor David Quigley officiating. In lieu of flowers, memorial contributions may be made to a charity of one’s choice.