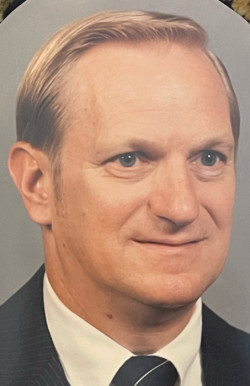 Gerald L. Buckland, 83 of Dryden, went to join the other angels on Saturday, July 23, following a long battle with Parkinson’s disease. He was born in Binghamton on May 22, 1939, the son of the late Charles and Flora Halpin Buckland, Sr. He is survived by his wife Shirley, her children: Dawn (Daniel) Gonzalez, Donald (Jackie) Norman Jr.; grandchildren: Antonio, Armando Gonzalez, Alexandria, Paul Harding, and great grandson Owen; 3 brothers Charles, Jr. (Elizabeth), Leonard (Charlotte), Robert residing in a Horseheads Nursing Home; several nieces and nephews that he held dear to his heart.

Gerald served in the US Marine Corps from 1957 to 1967; he held the rank of sergeant. He went to the Naval Parachute Rigger School and flew helicopters. Gerald was given a certificate for service from the White House by President Eisenhower. He worked in computer science at Cornell University, Ithaca College, and NYSEG where he retired after 23 years of service. He also belonged to a Data Processing Management Assoc. (DPMA/AITP) with which he had many colleagues and friends nationwide. A man with so much strength in body & mind, but also with kindness and tenderness of heart to hold a newborn baby or a kitten without harming them in anyway. He opened up his heart to a family and took them on as his own. He has never wavered from any task, always being responsible and respectable. He was a man you couldn’t help but love, a great loss to all who knew him. A funeral service will be held Friday, July 29 at 1 PM in the Perkins Funeral Home, 55 W. Main St., Dryden, and the family will receive friends from 11 am to 1 pm before the service. Burial will be in Willow Glen Cemetery with military honors. In lieu of flowers donations can be made to the Dryden Ambulance and Fire Department.

x101_wxhc
•
Follow
A look over yesterdays 22nd annual Brockway Truck Show from the top of our studios in Downtown Homer. #Brockway #HomerNY
View on Instagram |
1/20

x101_wxhc
•
Follow
We’ll be on location at the Arts Off Main Festival from 11 am to 1 pm this Saturday, August 6th. This is a reimagining of the twelve-year-old Arts & Wine Festival, taking place in the parking lot behind the McNeil building, nestled between Main, Central and Church Streets. These areas will be transformed into a family-friendly celebration of Cortland’s art and creativity, and downtown. #ArtsOffMain #MyCortland
View on Instagram |
3/20

x101_wxhc
•
Follow
History has been found at the old Gillette Skirt Factory off of Homer Ave. in the City of Cortland. Yesterday, Troy Beckwith Sr. unveiled the location of a time capsule that was discovered inside the first concrete block laid in the construction of the building back in 1904. #History #TimeCapsule See our photo gallery at wxhc.com, link in the bio
View on Instagram |
9/20

x101_wxhc
•
Follow
Rival coaches, but a team on the mound when both head coaches of SUNY Cortland and Ithaca College football teams throw the ceremonial opening pitch for an MLB Yankees Game on Thursday, July 28. 📷 Courtesy of @sunycortland #CortacaJug #Yankees
View on Instagram |
12/20

x101_wxhc
•
Follow
A reminder to make sure your pets are ok with all the fireworks happening! #TakeCareOfTheAnimals
View on Instagram |
14/20

x101_wxhc
•
Follow
We’re enjoying the AgeLess Band this evening on the Homer Village Green. What a gorgeous night for some jazz! #Jazz #HomerNY #MyCortland
View on Instagram |
15/20

x101_wxhc
•
Follow
Oh gosh, remember printing these things out!! The young people would never be able to get somewhere with this paper. #LongAgo #NoGPS #AlwaysClassic
View on Instagram |
16/20

x101_wxhc
•
Follow
We’re so glad the rain held off tonight for the first concert in the Village of Homer Concert Series with The Old Timers Band! #SummerMusic #VillageGreen
View on Instagram |
17/20