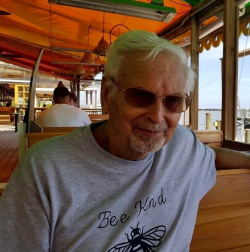 Gary Homer, 77, of Cortland, NY passed away peacefully at home surrounded by his family, on Thursday April 7, 2022. He was born on January 21, 1945, in Cortland, NY to Edith and Darrell Homer.

Gary was a loving husband, father, grandfather, Poppi, brother, and friend. He proudly served in the United States Army National Guard as a cook for 8 years. Gary worked at Cornell University for 37 years before retiring as a Facility Manager in March of 2007. Gary then went on to have mini careers as a seed representative for Ferry Morse, a car mover for local dealerships in Cortland and a crossing guard for the Homer School District. Gary was an avid drummer having played with Mickey Lee and the Persians during his high school years and then jamming with his friends later in life. Gary was intrigued by bees and ran Homer’s Honey for several years.

Later in life Gary enjoyed spending time with his family going camping, taking cruises, riding his motorcycle, or driving his Miata. Gary learned to fly at an early age, taking the opportunity to fly solo, experience a glider, and a hot-air balloon. Many of his fondest memories were of the time spent with his special family members Steve and Debbie Sparling.

The family would like to express our deepest appreciation to Hospicare & Palliative Care Services of Cortland. A special thank you to Nurse Rachel! Memorial donations may be made to Hospicare at: https://www.hospicare.org/donate/donationform/

Calling hours will be held on Saturday April 23, 2022 from 1-3pm at the Homer Congregational Church. A memorial service will follow at 3. To offer online condolences please visit www.wright-beard.com