23 hours ago
McGraw Fire Department Responds to Structure Fire
23 hours ago
Homer Police Respond to Heron in Distress
23 hours ago
Gas Now Over $4.70 a Gallon in Cortland County
23 hours ago
Man Exposes Himself, Brandishes Knife, and Damages Vehicle 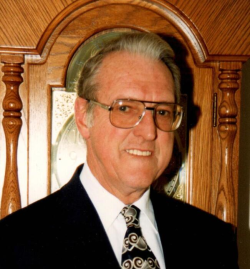 Earl C. Levengood, Jr. passed away at home on March 30, 2022. Earl was born to Helen (Lutz) and Earl C. Levengood, Sr. on September 22, 1934, in Pottstown, PA. While growing up in Pottstown, he enjoyed participating in sports and he fondly recalled the time of his high school baseball team’s induction into the Baseball Hall of Fame for a superior winning streak. After graduating from Bloomsburg and Alfred Universities, he began his career teaching high school, before moving on to teach at the community college level. After time at Corning Community and Cobleskill A&T, he was approached by Hugh Bahar, whom he’d met earlier while at Corning. Tompkins Cortland Community College’s newly appointed first president Bahar asked Earl to join him in the start-up of TC3. Thus, he was in on the planning and complete set-up of the new college. Even the interior design was based off Earl’s concept of an “educational shopping mall.” Earl loved teaching, and there is likely no one who loved that college more!

Earl served in the US Army and was a 50+year member of the VFW. As his health declined, he began saluting every American flag he passed. He’d not say a word, just salute. He was a charter member of the Ithaca-Cortland Chapter of the National Association of Accountants and served a time as their president. He also served as president of the Dryden Kiwanis, and for a number of years ran their Little League Baseball program. He coached the Dryden Little League Baseball team and Babe Ruth Baseball, as well. He never forgot those experiences or those kids he coached! Nor did they forget him!

Calling hours are scheduled for 2-4 pm Sunday, April 3, 2022, at Perkins Funeral Home, 55 West Main St., Dryden, NY. Service will follow immediately after at 4 pm. A Celebration of his life will follow after the service at the Dryden Veteran’s Memorial Home, 2272 Dryden Rd. (Route 13) Dryden, NY.

Contributions honoring Earl may be directed to Hospicare and Palliative Care, 172 E. King Rd., Ithaca, NY 14850 or just reach out with a smile or a helping hand to someone you see in need!