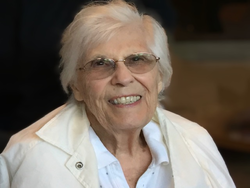 Dorothy Buechel, age 99, left this world peacefully on January 16, 2023 at Hospicare following a long life well lived. Born on December 10, 1923, to Jacob and Lucy Staub, Dorothy was raised in Rochester, New York, the youngest of five children. She graduated from Mercy High School and, with the onset of World War II, went to work at Kellogg-American Brake Shoe Company in Rochester.

During a Kellogg company picnic, she was introduced to Ed Buechel by his matchmaking father, while Ed was home on leave from the Navy. A lifelong romance soon developed, and in 1947 Dorothy and Ed were married– the start of 75 years of marriage that resulted in five children and a lifetime of happiness. With two toddlers in tow, they moved to Ithaca in 1951, and then on to their Valley Road home in Brooktondale, where they resided for 69 years. Being a city girl, Dorothy found the transition to rural Brooktondale somewhat challenging. However, she rose to that challenge, and soon embraced raising her children in the charm and innocence of country life. She provided a warm, safe environment for her family, and the Buechel home was often the center of activity for all the neighborhood kids.

Dorothy eventually returned to work, beginning as an administrative aide to Dr. Martin Tinker, whom she often assisted in office surgery procedures. Following his retirement, Dorothy went on to work for Dr. Mary Tinker in her country practice in Brooktondale. Dorothy eventually joined Ed in retirement, when they especially enjoyed towing their camper on several trips across the United States, culminating in a particularly memorable two-month journey to Alaska.

Dorothy was actively involved as a 4H leader, and with the Caroline Seniors group. She was a lifetime communicant of Immaculate Conception Church. Inspired by her mother-in-law Ollie, Dorothy always appreciated the generosity of others, and adopted Ollie’s kind, giving spirit throughout her long life.

A Mass of Christian Burial will be held at St. Catherine of Siena Church on January 24, 2023, at 11 a.m. Those who wish may pay their respects to the family at St. Catherine’s at 10:30 a.m. before the Mass. The family wishes to thank Hospicare for their kind attentions to Dorothy in her final days. In lieu of flowers, donations may be made to Hospicare of Ithaca.