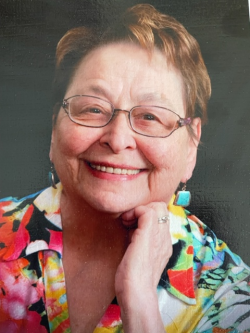 Dorothy Ann Marquis (nee Lombard) passed away Tuesday, May 31 but her larger-than-life persona and trademark stubbornness will not be forgotten.

Born September 13, 1936 in Buffalo, NY (The city her parents eloped to after her Italian father, the late Michael Francis Lombard, slowed the car enough for her Irish mother Dorothy Elizabeth Price, to jump into.) She grew up in Hazel Hurst, PA, delivering groceries from her father’s store to most of the 200 people who lived in the town. Her siblings (who predeceased her) Joan Carol Jackson and Philip Francis Lombard joined her as she played in the creeks and sledded down School Street.

Affectionately known as Dotty by her family and friends, she moved to the big city of Ithaca after graduating as high school valedictorian and then Bryant and Stratton College. A career woman before it was fashionable, she spent her working years at Cornell University, starting in the athletic department and finishing as Director of Medical Records at the Cornell Vet School. She loved Ed Marinaro, Cornell Hockey (during the Harkness glory years) and ice skating at Lynah Rink.

Dotty also loved classic cinema, musicals, soap operas and all celebrity gossip. She detested mean people, those who wear baseball caps to church, and the Kardashians. Famously opinionated, Dotty always told you the truth, even if it wasn’t what you wanted to hear. She was also generous to a fault and loved her friends fiercely.

Dotty eloped, then divorced, and by the age of 25 was living in Freeville with a mortgage and three children under the age of five. She attended the Freeville United Methodist Church, where she met Clarence Marquis (who survives her) in choir practice. Too tired to date, Clarence courted her by dropping by the house to do small repairs, changing light bulbs, and bringing treats for the kids. She finally declared she would go on a date if she could call him Mark (for Marquis) and sure enough they were married June 29, 1963.

After raising their children and retiring, Dotty and Mark spent decades traveling the world from Russia to Europe to the Caribbean. Mark was the love of her life; all of the 58 years, 4 months, and 2 days they were married. In her last hours, Dotty roused from her deep state of sedation, opened her eyes to exchange their last words with one another, “I love you Marky Mark” – “I love you Dear Dear.”

Visitation will be Monday, June 6 from 4:00 pm to 6:00 pm and funeral services will begin at 10:00 am on Tuesday, June 7, both events to be held at Perkins Funeral Home, 55 West Main Street, Dryden, NY 13053. Not surprisingly, Dotty gave instructions for her services, pronouncing that all those attending should dress in bright, bold colors. The family respectfully asks you to wear a mask to protect Clarence’s health.

In early March of this year, Dotty received a diagnosis of late stage metastatic lung cancer. Chemo promised 8-14 months, no chemo 3. She stated, “Well, that’s a kick in the teeth” and settled on living without treatment. She lived every day without pain and was vibrant until just a couple of weeks before her journey on this earth ended. She will be greatly missed and fondly remembered by many friends, family, neighbors, nieces, nephews and all those she gathered during her life.