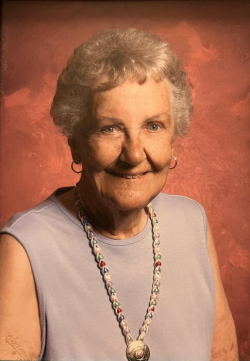 Dolores E. Chamberlain Samson Grenell was born in Cortland, NY to Reuben J. Chamberlain and Edra R. Fuller Chamberlain on September 23, 1924 and went to be with her Lord and Savior on Sunday, September 11, 2022. Dolores was predeceased by her parents, husband, Francis Grenell; brothers, Charles (Delores) and Donald (Velda) Chamberlain and infant daughter, Judith Irene Samson.

She is survived by her children, Sheila Sanford, Frederick (Cheryl) and Raymond Samson, 7 grandchildren, 10 great-grandchildren and several nieces and nephews.

Dolores graduated from Cortland Central High School in 1942, after which she worked for The Edmund Machinery Company and Sears Roebuck before going to work at the Cortland Savings Bank, where she worked for many years. It was during this time she and her late husband moved to a small farm in Groton and raised her children together. After retirement she and her late husband moved to Dryden where they lived for many years before moving to Zephyrhills, FL for a short time. When living in Dryden, she worked at Chappell’s Clothing Store. After living in Florida they returned to NY and settled in Groton, at which time she worked part time for the Groton School District in the elementary cafeteria. Years later, Dolores moved back to Cortland, where she remained vibrant, proudly volunteering for the Cortland Hospital Auxiliary and Cortland County Retired and Senior Volunteer Program (RSVP) until her 93rd birthday. She humbly received Volunteer Service Awards from both the New York State Governor and the United States President. Dolores was a member of the Groton City Church and a Lifetime member of the Dryden Seniors.

Dolores adored her family and loved spending time with them. She found joy in traveling, shopping, reading, attending Syracuse Symphony concerts, dancing, listening to music, playing cards with family and friends, and being with her dogs and the family dogs. A huge ‘Thank You” goes out to the wonderful staff of Groton Community Health Care Center for the exceptional and loving care shown to Dolores over the last 5 years.

Friends and family are invited to visit at The Crown Alliance Church, Cortland, NY, on September 25, 2022 from 2-3 pm with a memorial service starting at 3pm. A burial ceremony will be held at the Blodgett Mills Cemetery at 10am on September 26, 2022.

In lieu of flowers, donations may be made to the Cortland County SPCA.