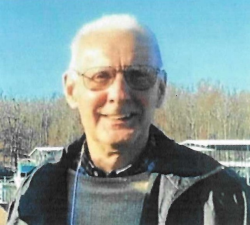 While working on his master’s degree, he began his teaching career by teaching high school in Hammondsport New York then moved to teach college mathematics at State University of New York in Fredonia.

1969 Carl accepted a teaching and research position with Texas A&M and moved his family from New York to Bryan Texas. Carl was employed at Texas A&M for 33 years, retiring in 2002 with Emeritus status and numerous accolades including supervising 14 PhD students, 157 Publications, 77 Colloquium talks, and 50 invited Conference Talks. Due to his involvement with PhD students, the Maxson Lecture Series was crated in 2007.

Carl was a proud and loving father of Jim and Debi, and him wife, Carol, throughout their 64 years of marriage. When not in his office at A&M, he was busy coaching Little League, Playing men’s softball, and most of all played basketball twice weekly with a group of men, for over 20 years.

There will be a Memorial Service Celebrating Carl’s life on Sunday, September 26, 2021 at First United Methodist Church in Bryan with a reception following the service.