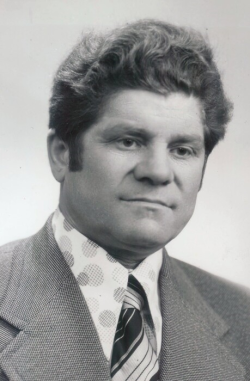 On Sunday, October 24, 2021, Aleksey Grigoryev, passed away at age 94. Aleksey was a loving Husband, Father, Grandfather and Great Grandfather. Aleksey was born on August 18, 1927 in Vinnitsa Ukraine to Samuel and Rachel Kleiner. He was the sole survivor of his extended family who perished in the holocaust. Circumstances beyond his control compelled him to change is birth name, Yaakov Kleiner, to Aleksey Grigoryev. Aleksey actively spoke out against corruption in the Soviet Union, for which he spent 5 year in the gulag.

Aleksey married his wife, Margarita, on November 30, 1956 and they raised four kids, Svetlana, Vladimir, Aleksandr, and Yelena. Aleksey worked in a coal mine for 42 years. On his spare time, he voluntarily worked as an auditor of retail commerce, in a personal attempt to root out corruption. As an auditor, Aleksey battled against common forms of corruption in the Soviet Union, such as product tampering, price manipulation, bribery, theft, black-market trading and other illegal activities by city officials.

Aleksey and his wife immigrated to the United States on June 28, 1992, just months after retiring. The quality of life Aleksey had in his retirement was far greater than anything he imagined was possible. Aleksey lived 28 years in Ithaca, NY. The remaining year of his life, Aleksey lived with his family in Freeville, NY. Aleksey spent his free time in the United States attending church, going for long walks from store to store comparing prices, spending time outside in nature, cooking, and feeding his many grandchildren.

As his family’s sole survivor of the holocaust, Aleksey has left behind an amazing legacy. Aleksey is survived by his wife Margarita, his four children, Svetlana, Vladimir, Aleksandr, and Yelena, 32 grandchildren, and 62 great grandchildren.