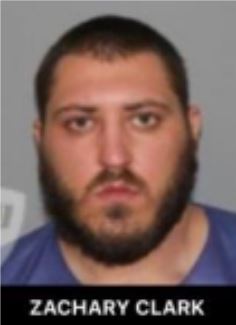 DA Patrick Perfetti has announced sentencing for a man convicted of shooting a city of Cortland police officer back in March 2020, which led to a tense 11-hour standoff on Elm Street.

Following a trial in June of this year that lasted six days, 28-year-old Zachary Clark now faces 35 years to life for the Attempted Murder of a Police Officer.

He was also hit with concurrent charges of 1st degree Assault and Aggravated Assault on a Police Officer; along with two counts of menacing a police officer.

This combination adds another 30 years on top of his sentence, along with more than a decade of post-release supervision if he’s paroled early.

More from the DA’s office:

“This 188 second event, particularly as to the conduct of the officers first responding to this shooting,
was nothing less than heroic,” said D.A. Perfetti. “We are grateful that there were no further injuries or a loss of life as a result of the 11 hour stand-off that followed.” “And we are hopeful that today’s
sentencing sends a clear message that this community stands behind its First Responders and is
grateful for their service.”

In June 2021, D.A. Perfetti and 1st Assistant D.A. Victoria Monty, presented the case for the prosecution
that had been investigated by the NY State Police – Major Crimes Unit, Sydney, New York, consisting of
video footage from 7 responding agencies, hundreds of photographs, forensic firearm examinations, and
over a dozen witnesses.

“Cortland County has proven its ability to properly conduct a jury trial that safeguards the due process rights of the accused, while also ensuring that jurors, witnesses, court staff, spectators, and parties are safeguarded against Covid transmission. A trial under Covid protocols takes longer and has its challenges – but we have demonstrated that it can be done, and done well.

The protocols require social distancing; that means that the dual jury boxes on opposite sides of the courtroom are utilized. All personnel must wear masks, the witness stand is sanitized between each witness, and movement within the courtroom is restricted.

“First Responders are said to potentially lay their lives on the line every day,” said 1st Asst. DA Monty. “That was certainly the situation in this case and I truly do not like to think about how differently the events of March 27, 2020 might have turned out. We are thankful that this was an Attempted Murder case rather than a Murder case. We’re grateful that justice was served and he won’t be able to harm others in our community.”