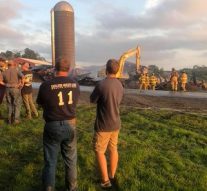 pley family is now rebuilding, after a large fire on Saturday (August 29) destroyed a barn that contained nearly their entire arsenal of tools & equipment.

Worse yet, it happened right before harvest season. Now members of the community are jumping in to help.

A Facebook post in the Moravia Hometown Pride group was shared over 700 times, encouraging members of the community to support the family.

One suggestion was to buy their dairy products, which can be found in many local stores.

Also, the family itself created an online Amazon shopping list with the items considered to be most in need.

Their farm, Hillcrest Dairy in the town of Summerhill, was the site of a blaze that drew response from multiple departments in three area counties.

Thankfully, nobody was injured and no animals were lost; nor did any other structures sustain damage on the property.

One house across the street did have part of its siding melted off from the heat.

x101_wxhc
•
Follow
In a press conference this morning at Guthrie Cortland Medical Center’s Main Entrance on Alvena Ave. hospital president Jennifer Yartym, MSPT, MBA was joined by Mayor Scott Steve and caregivers from many hospital departments. “We made a proclamation of May 10th as Guthrie Medical Care Center day in honor of caregivers that had given up these last couple of years during this very difficult time of COVID” said Scott Steve. “Everyday should be nurses day or healthcare week because truly the last two and a half years with those individuals on the front lines we wouldn’t have been able to keep afloat without them.” said Hospital president Jennifer Yartym. #Guthrie #NursesWeek 📷 courtesy of Guthrie
View on Instagram |
4/20

x101_wxhc
•
Follow
It’s great to be at the 50th annual Maplefest!! Activities and events happening all weekend. Come spin our prize wheel, we’re here on the village green until 11 or so! #OnLocation #AlwaysClassic
View on Instagram |
8/20

x101_wxhc
•
Follow
Don’t be a fool today and NOT listen to X101! Available everywhere. #aprilfools #AprilFoolsDay #alwaysclassic
View on Instagram |
10/20

x101_wxhc
•
Follow
Lol, this color was everywhere back in the 90s. We don’t have this color but we’ve got all your favorite 90s music on X2 Classic Nineties. Listen with our app or online @ wxhc.com. #Nineties #NewClassics
View on Instagram |
11/20