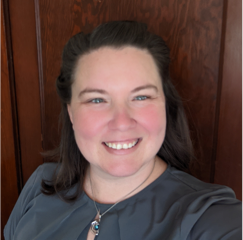 Prior to joining the staff, Mikowski served on ATI’s Board of Directors for four years, including during the last transition of executive leadership.

She was previously with Liberty Resources and before that the mental health department.

“From a young age, I’m grateful to have been taught that disabilities don’t have to limit you,” said Mikowski. “My grandmother, Terry Ofner, was the Executive Director at the Finger Lakes Independence Center (FLIC). During that time, for example, I would spend time with folks with visual impairments who own speaker repair shops and others who inspired me to work on my own challenges. I grew up learning to navigate several disabilities myself, including a learning disability in written expression and a speech disorder. As an adult, I also have had to manage chronic illnesses such as endocrine and autoimmune disorders.”

Mikowski has coordinated events with Access To Independence for the last 10 years, including the NY Connects Resource Fair, Mental Health Awareness walks, LGBTQ+ events, Narcan training pop-ups, and many more.

In addition, she has worked with ATI staff to offer the best options for community members on their journey to independence.

“Professionally, I have worked with folks with disabilities both subtle and obvious – some who use accessibility tools and some who do not,” Mikowski said. “Much of my work the last 20 years has been working with individuals with invisible disabilities, such as folks who sustained Traumatic Brain Injury, struggled with mental health, problematic substance use, and those diagnosed with developmental disabilities. I wholeheartedly stand behind the mission of the agency to empower people with disabilities to lead independent lives in their community and strive to open doors to full participation and access for all.”

“I am pleased that Alex has accepted the Board of Directors’ offer to become the Executive Director of ATI. I am looking forward to working with her in the future,” commented Larry Woolheater, Board Chair for Access To Independence.

“Unfortunately, many people do not know about ATI until they acquire a disability themselves or a loved one does,” said Mikowski. “Like many Independent Living Centers, the goal at ATI is to help those with disabilities have all the support they need to live a happy and fulfilling life. I feel overjoyed and honored to be chosen to lead the agency into the future as we honor our past.”